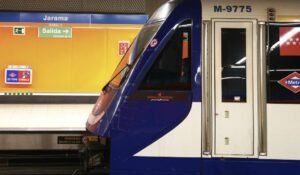 The improvement works, which will affect the section between San Fernando and Hospital del Henares, will be carried out on a date yet to be determined between September and December

Ninth outage for works on Line 7B of the Madrid Metro since its inauguration 15 years ago. On this occasion the interruption of the train service will affect the section that joins the stations of San Fernando and Hospital del Henares and, as EL MUNDO has learned, it will take place on a date yet to be determined between the months of September and December.

In the Ministry of Transport they explain that the technicians are “monitoring the terrain”, that Suffers from leaks and stability issues pretty much from the start, to determine the scope of new improvement work. Once this survey is completed, it will be decided how long this section of the underground will remain partially closed, but in any case a spokesman anticipates that it will be due to a “long” period.

In the meantime, the Community of Madrid has begun the procedures for the award of the substitute bus service that will carry out the cut Metro route on the surface, which will affect the stations of San Fernando, Jarama, Henares and Hospital del Henares. For now, it has announced a public tender through the Contractor’s Profile with a tender budget of 962,090 eurosVAT included.

In principle, it is estimated that this alternative line to guarantee mobility in the municipalities of San Fernando de Henares and Coslada be in operation for 122 daysie about four months. However, the specifications themselves include the possibility that two extensions of up to 121 additional days can be applied in two phases: the first of 62 days and the second of 59.

The extension of Line 7 was inaugurated by Esperanza Aguirre in 2007, coinciding with the election year, and since then the approximately 6.5 kilometers of new route and the seven stops that make up the so-called East Metro have registered multiple incidents. The Community of Madrid has had to interrupt the service already eight times and invest more than 22 million euros in works to inject concrete into the ground, waterproof the tunnel and fix cracks in adjoining homes.

Something that has not been possible in all cases. Some residents of the area know well, who have seen how their flats have been demolished due to the risk of collapse. Eva, a resident of Calle Rafael Alberti 1, in San Fernando de Henares, does not hide the “sadness and disappointment” for this situation.

This past May, between tears, he watched as a gigantic crane hit and knocked down the facade of his block. the regional government has had to relocate at least 46 familiesmost in aparthotels.

In one of these, located next to an industrial estate in Canillejas, Eva lived with her husband and 10-month-old son, until they couldn’t take it anymore. “It was impossible, it weighed a lot. A neighbor just had a baby… People try to go out but it’s complicatedMany of the affected residents still live there.

Some of them gathered this past Saturday in a meeting where “discouragement” was more than present. “On September 20, our emergency order contract ends. Already at the April meeting they told us that they were not going to extend it. The words of the Community are that They will not pay rent or aparthotels and that we spend that money on housing they make you understand that it will be included in the compensation. Has no sense”.

Eva says that, at the meeting, some of those present “were crying”, while others were “very nervous”. “There are people with very high mortgages who can’t afford to pay rent, too. Or neighbors like Marcela, 95, who receives the minimum widow’s pension…”.

From the Ministry of Transport of the Community of Madrid they corroborate the local version and assure that “noor the emergency contract can be extended because the house will be completely destroyed” on September 20. “From that date on, the tenants will have to pay and all that money spent will go towards compensation. There will be people who do have another home or accommodation, we do not believe that all families are in a situation where they do not have more options. Each case is studied,” explains a spokeswoman.

For the moment, the affected residents continue to present the documentation required by the Community. Invoices and receipts that justify the expenses to compensate (such as reforms or furniture) within their homes.

But while the money arrives, neighbors like Eva continue to yearn for those expenses that they have not been able to prove, because the passage of time has devoured the receipts. “My only son’s pacifier. The chair where my mother always sat before she died… I haven’t been able to submit invoices for so many memories, and now I’ve run out of them. I was a dance teacher, and in my house There were dozens of expensive dresses and shoes left, as well as international awards that I received. Where am I going to find tickets from 30 years ago? It’s a lot of money, but I haven’t stopped to calculate it because emotionally I can’t“.