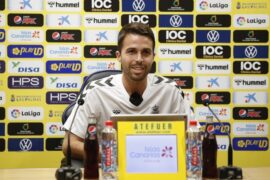 The footballer from Tenerife, absent during the entire preseason, hopes to return next December “as the best winter signing”

The UD Las Palmas footballer Kirian Rodríguez has revealed that he suffers from Hodgkin’s lymphoma and that, from now on, he begins his “fight” against the disease, which will keep him “for a while” away from football, but from which he assures that he is going to “leave” to “return” to the team. The 26-year-old player from Tenerife explained in an appearance before the media that this has been the reason why he has been absent from the current preseason with the yellow team, to which he hopes to return next December “as the best winter market”.

Kirian has reported that during the holidays he felt that something in his body was not going well and he was not physically comfortable, “with kidney pain, inflammation and discomfort”, as he specified.

In the first tests that were carried out, they detected that his spleen was inflamed, so the doctors decided to admit him to hospital and it was then that he tested positive for covid-19, publicly communicated by the club, before the squad moved to a concentration in Marbella (Mlaga).

“They manage to extract a ganglion to analyze it and it is confirmed that I have Hodgkin’s lymphoma, a cancer,” the footballer has communicated to end the rumors of recent weeks, in which there has been “speculation” about his state of health “and many have wanted to advance the news before respecting my privacy,” he lamented.

Kirian, very whole in a six-minute appearance, but visibly moved at the end of his speech, stressed that from now on “a separate fight begins, a totally different game”, because he will be “for a while standing and away from the field of game”, but continue to support the team because he will continue to be close, “giving directions from the stands and yelling at everyone, that’s not going to change me”.

The player, after thanking the treatment received by the doctors both towards him and his family, as well as the club and his teammates, does not want to receive “messages of sorrow”, but to be seen “strong”, because he is going to “come out” of this disease, and assures that at the end of the year “they will have the best winter market, because I am going to return, so there is no rush”.