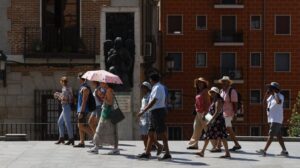 In addition, the provinces of Teruel, Zaragoza, Huesca, Burgos, Soria, Cuenca, Guadalajara and La Rioja will be at risk from storms, while Gran Canaria, La Gomera, El Hierro and Tenerife will be under warnings for coastal phenomena.

Possible rain in Galicia and Asturias

This Wednesday cloudy intervals are expected in areas of northern Galicia and Asturias, without ruling out light rains. There will be some instability throughout the day, so showers or occasional storms are expected from the early hours around the upper Ebro and nearby areas of Castilla y León.

Evolution clouds are expected in much of the interior of the peninsula, more abundant in mountain areas to the north and east, with showers and storms, which may be locally strong in the northeast quadrant of the peninsula, mainly in the Iberian Peninsula and the Pyrenees. It is not ruled out that they could spread to areas of the North Plateauand.

In the Canary Islands, cloudy intervals are expected in the north and slightly cloudy skies with medium and high clouds in the rest. There will be a probability of mist, stratus and coastal fog in the Ras Bajas and morning fog in the interior of Asturias and Galicia, as well as in the surroundings of Ceuta and Melilla, in addition to haze in the Canary Islands and the area of ​​the Strait, tending to refer throughout the day.

Rising lows in the northeast

In the case of maximum temperatures, they will have a predominance of decreases in a large part of the Atlantic slope and with few changes or rising in the Pyrenees and the south of the Mediterranean slope. They are expected to exceed 38/40 degrees (C) in the valleys of large rivers in the southwest of the peninsula. Regarding the minimum, they will rise in the northeast, more markedly in the upper Ebro, and will tend to decrease in the southwest.

In the Canary archipelago, warnings will be activated for maximum temperatures of 38C in summits and medians facing the south, west and east of Gran Canaria, and for maximum of 34 C in medians of the south and west of the western islands and interior of the most eastern ones.

In addition, trade winds will blow in the Canary Islands, with strong intervals in the channels between the islands, winds from the northeast or north in western Galicia, Levante in the Strait and the eastern end of Andalusia, and a predominance of light, variable or southerly component winds in the rest of the pass.