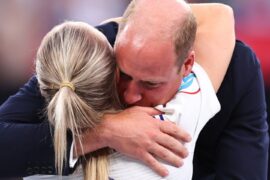 England soccer player Leah Williamson reveals what Prince William said to her after the final.

On Sunday (July 31) the English women’s national soccer team won the European Championship on home soil. Prince William (40), as President of the English Football Association, was also present in the final against Germany at the legendary Wembley Stadium in London. At the award ceremony, the British royal even hugged some players – and whispered something to them.

Captain Leah Williamson (25) now revealed what the British heir to the throne whispered in her ear. “I think I was about to shake his hand when he said, ‘Leah, come here’ and I said, ‘Thank you, sir’. He said, ‘I’m very proud of you all,'” she told the British newspaper “mirror”.

Actually, hugging a royal is breaking a taboo. But soccer fan Prince William didn’t seem to mind on Sunday night. He hugged back those who wanted it, beaming with joy. He congratulated the others with a handshake.

The Royals congratulated the team after the win

Along with daughter Charlotte (7), Prince William wished the England women’s national soccer team good luck ahead of the final. The two published a video greeting on Instagram. “We both want to wish the Lionesses the best of luck for tonight. You played an incredible competition and we have our fingers crossed that you make it,” says William in the selfie video clip. Charlotte, sitting on his lap, adds: “Good luck, I hope you win. Bye!”

After the team won 2-1 in extra time, Queen Elizabeth II (96) also congratulated the footballers. So she said on her Instagram channel: “My heartiest congratulations and those of my family go to you all for winning the European Women’s Football Championship.”