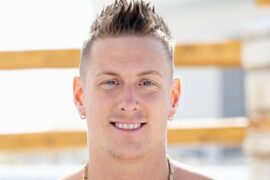 Calvin Kleinen
Will he be the new reality king?

From August 2nd Calvin Kleinen will be part of “Are You The One – Reality Stars in Love”. These candidates are looking for the “perfect match”.

Calvin Kleinen (30) has become an integral part of the German reality TV world. With “Are You The One – Reality Stars in Love”, the rapper is currently back in front of the camera for a reality format. In the show, which can be seen on RTL+ from August 2nd, the womanizer gets another chance to find true love. Together with nine other men and ten women, the single from Aachen is looking for his “perfect match”.

On Instagram, Kleinen regularly keeps his now 146,000 followers up to date about his life and TV appearances. The 30-year-old got his start at “Temptation Island”. In the season, which aired in March 2020, he and his then-girlfriend Pia Peukmann put their relationship to the test. Love didn’t stand up to the format and the two split up while the show was still on. This was followed by appearances on “Reality Shore”, “Celebrities under the Palm Trees”, “Temptation Island VIP”, “#Couple Challenge” and “The Big Celebrity Penance”. His prominence in reality circles even recently earned him an appearance on the second season of Temptation Island.

Kleinen is not the only one in “Are You The One – Reality Stars in Love” who has already taken part in several formats. Cecilia Asoro (26) has also looked for love on TV several times. She has appeared on Celebrity Disconnected, Beauty & The Nerd, The Bachelor and Take Me Out. In 2016 she also took part in “Germany’s next top model”. Max Schnabel (24) also wanted to end his single life with several shows: he was already part of “Take Me Out”, “Date or Drop”, “Ex on the Beach” and “Temptation Island”.

On the other hand, Michael Schüler (24) took part in completely different shows. He was in “Couple Challenge Winter Edition” and “My Date, My Best Friend and Me”. Celina Pop (23) worked on “Ex on the Beach”, Franziska Temme (27) fought in vain for the “Bachelor”.

Isabelle Brauneis (29) has already done it this year with “Are You The One?” tried and qualified for the celebrity version. In contrast to her, Zoe Saip (22) has no experience with the search for great love on TV. But she was already in front of the camera for shows like “I’m a Star – The Big Jungle Show”. She became known with “Germany’s next top model”.