So prodigal in storms was the channel of the Bahamas that uncertainty always rose aboard the Spanish ships that were preparing to cross the Atlantic laden with riches. But that midnight of January 4, 1656 there were no huge waves that threatened to engulf galleons and pataches, only darkness, a silent and unexpected enemy for the indies fleet. About 70 kilometers north of the archipelago, in an area of ​​shallow water, the captain Our Lady of the Conception tried to dodge a sandbank; turning, she rammed the admiral Our Lady of Wondersa galleon carrying several tons of precious metals.

In just under half an hour, the ship that received the impact, commanded by Admiral Matías de Orellana from Extremadura, collided with a reef and sank. Only 45 of the 650 people survived. that had been uploaded in Havana. The rest drowned or were eaten by sharks. Beyond the human losses, the shipwreck was a setback for the coffers of the Hispanic Monarchy. In the following two decades, several expeditions were organized to try to recover the cargo. could be rescued 36 bronze cannons and around 2.9 million pesossilver coins worth eight reais.

Since its sinking, the wonders —named after the sculpture of a miraculous Virgin in a Carmelite monastery in Madrid— has been one of the most plundered wrecks in history. But despite that ill-fated honor, his cargo and his jewels are still coming to light. A project by the company Allen Exploration, which has assembled a team of underwater archaeologists, local divers and other experts, has located gold and silver coins, Chinese porcelain shards, earrings, a silver ingot and other valuable objects, such as the hilt of the same metal of a sword that belonged to a soldier named Martín de Aranda y Gusmán.

Immersion of the divers of the Allen Exploration project.

“The wonders is an iconic piece of Bahamas maritime history,” says carl allen, entrepreneur, explorer and company founder. “The galleon wreck has a harsh history: it was heavily looted by Spanish, English, French, Dutch and American expeditions in the 17th and 18th centuries and looted by treasure hunters from the 1970s to the early 1990s. Some said its remains had been reduced to dust, but using cutting-edge technology and the best science we’ve been able to follow a long trail of finds.” The explorations of the wreck have been carried out since 2019 and have the approval of the Bahamian authoritiesaccording to a statement distributed by Allen Exploration.

In a search area of ​​12×8 kilometers – it is estimated that the remaining pieces of the wonders have been scattered by the action of hurricanes—researchers have identified more than 8,800 possible targets. “By mapping each type of discovery, we are reconstructing the mystery of how the ship capsized and sank“, explains James Sinclair, maritime archaeologist of the project, also focused on carrying out analyzes of the bottom and its evolution. “This is not just forensic underwater archaeology. We are also delving into previous excavations, finding out what they did, where and why.”

The objects of the Spanish ship, of 891 tons, will constitute the main attraction of the Bahamas Maritime Museum, which will open its doors on August 8. Among the most prominent is an impressive gold chain 176 centimeters, surely made in the Philippines, decorated with four-lobed rosette motifs and whose possible recipient was a member of the aristocracy or even Spanish royalty.

stand out too two gold earrings related to the Order of Santiago, which surely belonged to one of the embarked knights of the military body. The first, shaped like a scallop shell, was reinforced at the back by an Indian bezoar stone, famous in Europe in the 17th century for its powerful healing properties. The second jewel presents a green emerald from the current Colombian territory. Both pieces have a cross of Santiago in their center. Other religious objects recovered are a small medallion and a golden cross exquisitely crafted. 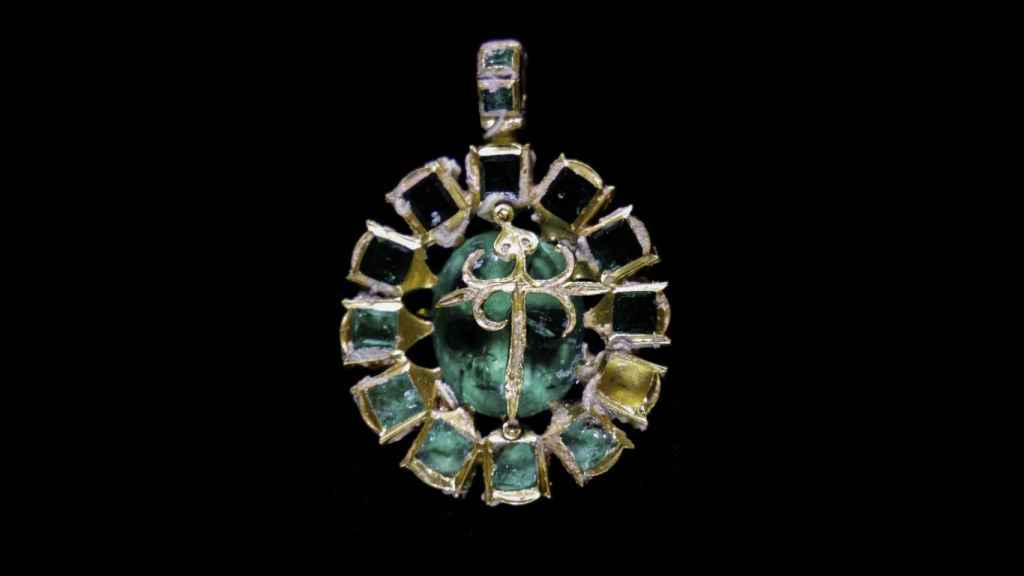 Image of earring with emerald. 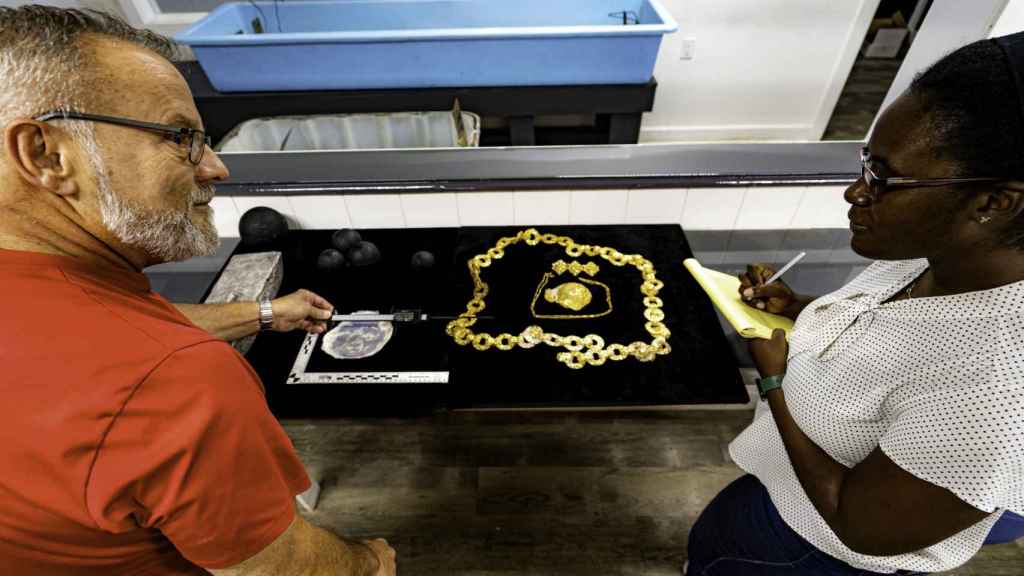 The gold chain and other pieces of the ‘Maravillas’, studied at the Bahamas Maritime Museum.

Remote sensing surveys with high-resolution magnetometers, side-scan sonar, and bathymetry analysis have located more coins minted in Mexico. The location is important because the Maravillas was not officially carrying silver pieces from New Spain. “The galleon was full of contraband that illegally swelled the pockets of Spanish merchants and officials”, Carl Allen points out. For this reason, it is impossible to calculate the true size of the galleon’s cargo at the time of its sinking.

From Allen Exploration they assure that this project, which has allowed locating another 18 wrecks, does not pursue any profit. “Nothing will be auctioned. Quite the contrary. Carl Allen is buying material from other shipwrecks to return it to the Bahamas,” they say, mentioning a bronze astrolabe belonging to another Spanish ship and that was illegally taken out of the country.

The voyage of the galleon

The Our lady de las Maravillas was built in 1647 at the Basanoaga shipyard by Martin of Urnieta and carried an imposing gold lion on the prow. On July 10, 1654, she set sail as an admiral ship of the Tierra Firme Fleet led by Captain General Francisco Nunez de Guzman, Marquis of Montealegre. The convoy arrived in Cartagena de Indias on August 22 and was to join the Armada del Sur in Portobelo, Panama. But before the beginning of the hurricane season, the fleet, which had lost a ship when it hit a reef, had to delay its return to Spain. 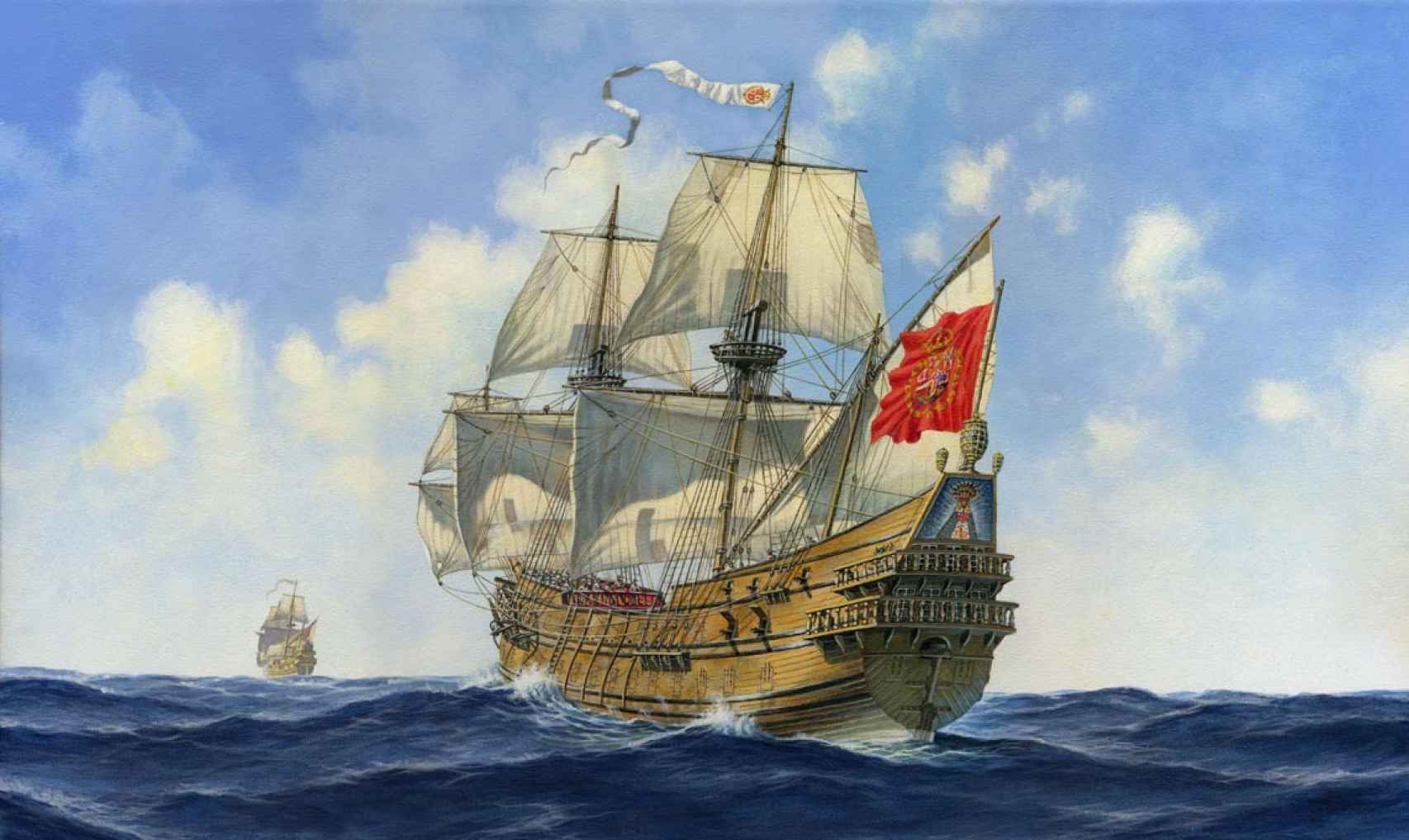 Reconstruction of the ‘Our Lady of Wonders’.

On July 1, the Marquis of Montealegre received orders to return, a journey that took a few more months due to the presence of English ships in the area. The wonders had picked up in Lima a large shipment of silver and transported the treasures saved from the Jesus Mary of the Clean Conception. After leaving Havana, skirting the north coast of Cuba and reaching the Bahamas Channel, the galleon met an unexpected end.