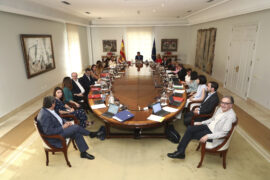 The air conditioning may not be below 27 degrees Celsius in summer and the heating in winter may not exceed 19 degrees.

The Government will publish this Tuesday in the Official State Gazette the decree of energy saving measures that all administrations will have to comply with, both the general State administration and the regional and local ones, as well as the private sector: shops, department stores, cinemas, theaters, stations, airports, hotels and distribution centers.

The new rule will be in force until November 2023 and grants a period of seven days for establishments to adapt to the requirements of temperature and light control. In short, the air conditioning may not be below 27 degrees Celsius in summer and the heating in winter may not exceed 19 degrees.

The Third Vice President, Teresa Ribera, justified these restrictions for reasons of solidarity with European partners that may be seriously affected by a possible cut in Russian gas supply. A closure of the gas tap that, in Ribera’s opinion, can occur at any time, which is why the European Commission has made a savings proposal to deal with Putin’s blackmail. Europe needs our help, he stated before recalling that Spain’s commitment is to contribute to the Union’s effort with a 7% reduction in energy consumption.

They are agreements of a government, added the minister spokesperson, Isabel Rodríguez, who is on permanent alert, who acts firmly and does not lose contact with reality.

The decree also requires the lights of shop windows and buildings to be turned off when they are not occupied. The lights will be turned off at 10:00 p.m. The decorative lighting of facades of buildings and monuments is also affected by this standard, which will include sanctions for non-compliance. And to this it adds, for shops open at street level, the obligation to have a door closing system before the end of next September.