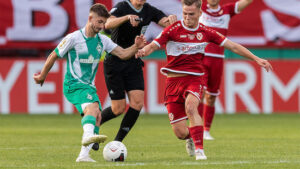 Werder Bremen moves into the second round of the DFB Cup with a bang. The Bundesliga promoted forces the regional league side Energie Cottbus to its knees 2-1 (1-0) away.

In the tenth minute, Ducksch hits the post after a pass from Weiser (10′), Romano Schmid does it better shortly before the break whistle. The 22-year-old from Graz (43rd) receives the ideal pass from Füllkrug and overcomes Cottbus keeper Sebald in a one-on-one – 1-0.

Werder is also the dominant team in the second half, Weiser makes the supposed decision in the 73rd minute of the game. But six minutes later Marco Friedl loses the ball near the baseline, Juckel plays to Heike and the Cottbuser (79th) scores to make it 1:2.

As a result, the hosts vehemently pressed for the equalizer, but Bremen managed to keep the narrow lead over time.

SV Darmstadt has far less trouble at FC Ingolstadt, which has been relegated to the second division, and wins 3-0 (2-0) away.

Tietz (15′) and Kempe (42′) from penalties ensured a comfortable lead in the first 45 minutes of the game, but then the “lilies” missed chance after chance. But that should not take revenge, Warming (84th) puts the lid on late.

Union Berlin has to go into extra time at Chemnitzer FC, but wins there 2-1. Müller (62′) puts the fourth division in front in the 62nd minute, but Siebatcheu (64′) had the perfect answer 85 seconds later. Substitute Behrens (114th) advanced to the match winner after a corner kick from Christopher Trimmel.