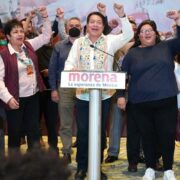 Almost all the reasoned approaches to the Morena party and President López Obrador’s political project have mistaken the framework of political analysis: they assume the 4th-T and its political instruments as if they were from the PRI, when the two political experiences are the same, but not They are the same. If the president had decided to institutionalize Morena, the decisions to institutionalize his movement should have followed other paths: corporate structure, class representation and, above all, a high-level leadership –it could be said that, as in the PRI past, of functional rank at the height of the political cabinet–, but from the beginning of his six-year term the president distanced himself from Morena and her needs.

In summary terms, President López Obrador never thought of Morena as a political party with a systemic project and a new governing elite, but instead took on his organization only as a placement agency, even taking advantage of the confusing electoral rules that govern political parties. . That is why he left Yeidckol Polevnsky as president at the beginning of the six-year term and then replaced her with Mario Delgado, two of the figures who tried to manage the organization, but without building it as a party.

The presidential rejection of the possibility of Porfirio Muñoz Ledo being president of Morena last year responded to the refusal to start building a real party halfway through the six-year term and with the political advancement of the presidential succession in 2024, because deep down a The formal party structure would make it difficult for the presidential-personal selection mechanism for the 2024 candidate. Delgado seemed to understand the presidential scenario and has only dedicated himself to managing decisions and defining candidates based on popularity and presidential subordination.

President López Obrador was aware of the PRI’s conflicts as a party when it led to an organization without ideology and with a structure that hindered presidential decisions. The current political regime can be characterized as a system of personal exercise of political power, without any party that hinders decision-making. The President of the Republic in the old PRI regime had to deal with understandings, negotiations and impositions to keep the corporate structure invented by President Cárdenas under control.

What happened to Morena in these four years of Lopez Obrador’s dominance –since the July 2018 elections– reveals an anti-partisan intention: leadership without representation, absence of dominant groups, assumption of militancy individually and not as class representation. or corporations, disarticulation in the traditional role of the parties with the government in presidential power and at least half of the states of the Republic without a functional structure of local steering committees, in addition to the delay in the configuration of some of the party structures that have been postponed, like the political council.

The scenario of political disorder that Morena offered was foreseeable and has always been discounted by the President of the Republic himself, because the threat that Morena adjusted to their needs or the president himself left the party continues to prevail in the minds of his followers. . In the middle of the six-year term, the president has not bothered to give functionality to the party.

In fact, Morena has functioned –and will continue to do so– as a movement of movements and a customs office for the distribution of candidates for public office, but it has not allowed it to become –as in the days of the old PRI– the application control structure. The model of polls that have not been able to demolish the presidential candidates has taken away from the party –even as a presidential mechanism– any intervention in the designation of candidates.

In political reality, Morena is the president of the republic. And it will be in the games of power tensions that come in the designation of the presidential candidate, with the scenario that the candidates know that they do not have the party or its militants and everything in the space of competition will be at the limits of power. presidential.

Hence the report of Sunday’s elections in Morena: everything went as planned.

Policy for dummies: Politics is exercised with power, not with political science.

The content of this column is the sole responsibility of the columnist and not the newspaper that publishes it.