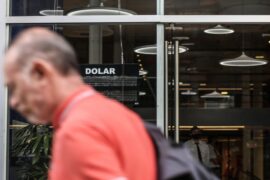 Quote of the blue dollar and the official dollar

Compared to the previous business day, the blue registered a downward trend: where it was trading at $286.00 for purchase and $296.00 for sale.

What is the blue dollar?

The Blue Dollar is the dollar that is obtained on the black market or parallel market. In Argentina euphemisms are used to refer to this dollar and it is also called blue, parallel dollar or black dollar. This dollar is not bought in banks or official exchange houses, but is marketed in “caves” or sold by the traditional “little trees” in the main streets of downtown. The price of the blue dollar is generally higher than the price of the official dollar and the gap tends to increase as exchange controls increase or restrictions on the purchase of dollars at the official price increase. The blue dollar market is insignificant in amount compared to the rest of the currency operations. It has, fundamentally, an influence on the generation of social and economic expectations about a possible strong devaluation. It is a variable used to generate political and financial instability scenarios.

It arises from the value of the dollar that companies and wholesale buyers are willing to pay through the operation known as “cash with liquidation”. In this operation, shares of Argentine companies or public securities listed on the New York Stock Exchange are bought in pesos and sold on that market. Thus, they obtain dollar bills free of official restrictions, abroad of course, at a much higher price than the official price.