The end of the year will be marked in particular by the release of Gotham Knights, finally exclusive to the new generation of consoles and PCs, and which will be accompanied by a very classy collector’s edition. Since June, Warner Bros. Games Montreal promotes it through videos dedicated to each playable character. We have therefore already had the right to those of Nightwing, Robin and more recently Batgirl when San Diego Comic-Con. Red Hood should follow, it goes without saying, but that is not what interests us at present. In effect, IGN shared the first 16 of the game following the prologue still kept secret as part of its program IGN First.

We will therefore have the choice between one of the four protagonists to start with, followed by what will serve as a tutorialhere Barbara Gordon who goes to the university Gotham. In addition to the movements, in particular at a distance via the grappling hook, it is an opportunity to see the vision eagle in augmented reality used to locate and scan objects to conduct the investigation. Moreover, it will be necessary inspect crime scenes and make connections between clues to solve the proposed situations, here open a secret passage. follows first battles against a band of arsonist thugs, which will also introduce us to the basics, with weak and powerful melee or ranged blows, dodging, two types of discreet elimination (non-lethal of course, even if it shouldn’t be good). The sequence ends with a “boss” clash against a type of heavy enemy in every sense of the word called Bulldozer.

For the most curious, a video shown during the SDCC shows us side by side a session of catch performancedifferent stages of digital recreation using this data and finally the rendering in-gameall taking place in the Belfry with our four heroes. Several visuals were also published on the networks. 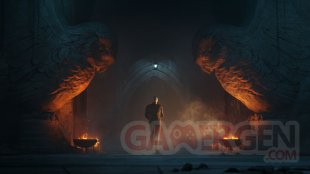 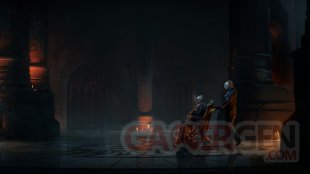 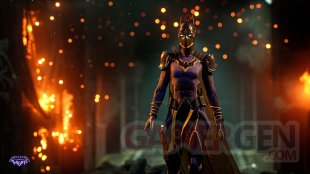 For his part, Jim Lee presented illustrations used to create the alternate appearances Knightwatch of the Deluxe Edition.

Gotham Knights will be released on PS5, Xbox Series X|S and PC (Steam, Epic Games Store) on October 25 and you can pre-order it on Amazon from €64.99.