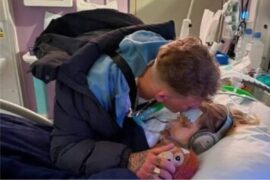 The Court of Appeals has refused to delay the termination of Archie’s life support beyond 12:00 noon on Tuesday.

The British JUSTICE has rejected a last-minute appeal against the cessation of care a 12 year old boy brain-dead, whose parents’ struggle has sparked great interest in the UK.

Archie Batterbee, 12, has been in a coma in a London hospital since April. The doctors consider that she is brain dead and the British Justice had authorized the hospital in mid-July end life-sustaining care.

His parents, supported by a Christian organization, say they want to give him every possible opportunity and assure that they have seen signs of life.

Although the treatments had to end on Monday at 2:00 p.m., they resorted as a last resort to the United Nations Committee on the Rights of Persons with Disabilities, which called on the British government on Friday to “refrain from removing archie of any treatment to keep him alive.” while studying the file.

The Government, which refuses to get involved in the case, has urgently transferred the request for United Nations to justice. But appeals court has refused to delay the cessation of care beyond 12 noon on Tuesday, allowing a short window for the family to consider other remedies.

“Your system, your organs and your heart are shutting down”said the judge Andrew McFarlane.

The parents’ attorney edward devereuxhad considered before the decision that rejecting the request of this United Nations committee – whose convention was signed and ratified by the British government almost 15 years ago – constituted a “flagrant and unacceptable violation of international law”.

But the treaty “does not form part of the law of the United Kingdom (…) and it is not appropriate for this court to apply an international treaty not incorporated (in the law) in its decision-making,” the judge argues.

Archie Batterbee he was found unconscious in his home on April 7 and has not regained consciousness since. According to his mother, Holly Danceparticipated in an online challenge to hold his breath until he passed out.

For Holly Dancestopping treatment is a decision of “extraordinary cruelty”. “archie He has the right to have decisions about his life and death … reviewed by an international human rights body,” he said.