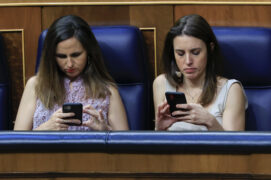 The general secretary of Podemos and minister of Social Rights and Agenda 2030, Ione Belarra, assured this Tuesday that the PSOE and United We Can have agreed “give time to reach a consensus text” in the Classified Information Law and “search for an intermediate point” within the period set to declassify top secret documents.

This was stated in an interview on RNE collected by Servimedia when asked about the draft bill approved yesterday in the Council of Ministers and which establishes a term of 50 years, extendable for another 15, to declassify the most sensitive documents for State security. We can, as she recalled, proposed one of 20 years extendable for another 10.

Nevertheless, Belarra relativized the fixed term of 50 years by noting that the draft was approved yesterday only in the first round. It will have to receive the mandatory reports from the advisory bodies before the Government approves it for the second and definitive time and sends it to the Congress of Deputies.

“We still have time and that is what we have agreed with our government partner,” he testified. “We have given ourselves time to reach a consensus text and that we can present to Congress in a consensual way”.

The leader of Podemos judged that the current draft, with its maximum term of 50 years, “at the moment it is far from transparent that is expected from a country like ours”, but stressed that “having called on us to continue working is good news” and trusted that the final text “meets all the objectives that we have set for ourselves”. He even wanted to “value” that the Government “has been able to address this debate”, that of approving a new law on official secrets, postponed for so long.

Belarra recalled that other parliamentary partners of the Government have also expressed objections to the 50 years and promised: “We are going to look for an intermediate point in which everyone can meet their objectives.” And he assured that in Podemos they are “open to negotiate and reach a point of consensus.”

When raised the possibility that the Government would draw up the Classified Information Law with the PP instead of with its usual partners, the minister preferred to declare herself “very skeptical regarding the possibilities of reaching an agreement with the Popular Party”, formation to which he attributes that “his approach is to break this government” and “that United We Can leave the coalition government, so that stability is broken.” “I wouldn’t expect anything from them, because they have shown that they don’t care about the citizenry,” she interpreted. “They only care about their own political benefit,” she added.