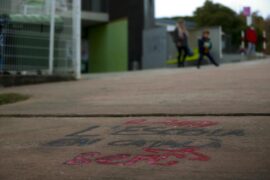 Messages such as “non-integrated settlers and terrorists”, “fascist”, “they have to live a media hell”, or that they must “make life impossible for the family”, in reference to the marriage of Canet de Mar and their 5-year-old son years that requested schooling in Spanish at the Tur del Drac school, are still public on the twitter social network more than six months after being published. It is “a hostile response movement” by several users who “simultaneously and collectively from different parts of Catalonia, spread humiliating and hurtful expressions against the aforementioned family in their respective accounts”, as indicated by the Prosecutor’s Office in its complaint filed with the Court of Instruction number 12 of Barcelona.

For this reason, the magistrate agreed to urge the withdrawal of these messages on the social network in addition to citing as investigated for next September four users denounced by the coordinating prosecutor of the Hate and Discrimination Service of the Barcelona Prosecutor’s Office Miguel ngel Aguilar for allegedly a crime against fundamental rights for injuring dignity for discriminatory reasons. The complaint from the Public Ministry recalls that the accused “have not withdrawn these messages, at least until the date on which the investigations were concluded, nor have they expressed apologies or regret for their publication. Their accounts were accessible to any user of the social network twitter “.

In addition, it indicates “the current extension of the new technologies at the service of communication, of which the defendants used, exponentially intensifies the damage of statements or messages that, at another time, could have limited their pernicious effects to a reduced and selected group of recipients”. In this sense, the Prosecutor’s Office recalls that with social networks the “harmful effects” of these messages “are multiplied by their massive and indiscriminate dissemination” and that “the incorporation of humiliating messages such as those published by those reported on telematic networks with vocation of perpetuity inexorably entails the loss of control over its zigzagging diffusion” since its impact can be “multiplied” with “successive and renewed acts of transmission” that “exponentially increased its vexatious and humiliating effect and, as a consequence, the suffering of the victims.”

In addition, the prosecutor recalls that the “unacceptable pressure” on the family of the Canet student caused the Superior Court of Justice of Catalonia to urge the Minister of Education and the management of the school to adopt the necessary measures to preserve their privacy. The court admitted the complaint for processing and cited as investigated the four twitter users who allegedly “expressly” singled out the family “in retaliation for their request for application” of schooling in Spanish at the Tur del Drac school at the beginning of the year. December of last year.

According to the Public Prosecutor, the defendants sought to “humiliate and harass” the family, requesting that they be identified as “the minor’s isolation from the rest of his classmates and therefore his social exclusion for exercising his right to to use the Spanish language in the terms established” by the TSJC. The prosecutor also believes that they wanted to generate in the family, which denounced the harassment, “feelings of anguish, anxiety and intimidation that would make them desist in their claim as well as warning other families who could have identical linguistic approaches.”

The complaint reproduces the messages of those under investigation, such as those who called the Canet family “non-integrated settlers and terrorists” or “fascists”, in addition to those who asked the school “to know the name and address where the family lives”, “so create the group P5, put the child alone and do it 50-50”, or that it was the “people who must make life impossible for the family that has made the complaint. They have to show that the next family that does so must leave town.”

Also under investigation is a user who posted earlier this year that “the only solution now and in the future is to demonstrate with facts that the next family that makes a similar complaint will live in real hell and have to leave the country” or “traveling around the world.” Catalonia you realize that the dirt in neighborhoods and streets of towns and cities is directly proportional to the amount of Castilian you hear”. For this reason, the prosecutor highlights that these messages “reveal a desire to expressly target the affected family with names and surnames” in such a way that it is “pointed out for their linguistic claims” so that they suffer “a media hell” and are made ” the impossible life” so that they leave Canet.

According to the complaint, another user made a “call to isolate the minor pretending that he has a specific school group due to the linguistic pretensions of his parents and also makes a call to leave him alone in the school with the humiliating consequences that this entails pointing out and humiliating publicly to the family with insults such as: ‘unintegrated settlers, terrorists or uncompromising parents’. A defendant also mocks the minor “reducing him and objectifying him as if he were meat to make cannelloni and attributes to her family the condition of fascist” for “speaking Spanish.”

The messages were produced as a result of the Superior Court of Justice of Catalonia (TSJC) forcing a public school for infant and primary education in Canet de Mar to teach at least 25% of the hours in a P5 class in Spanish, after a request made by the family. The Prosecutor’s Office opened investigation proceedings after receiving a complaint from the student’s father and from the entities Assembly for the Bilingual School (AEB) and Movement against Intolerance for this media harassment. In addition to the four investigated, the court has also summoned two other people to testify as witnesses for these messages.