The producer of ‘The Lord of the Rings: The Rings of Power’, Lindsey Weber, has addressed the controversy surrounding Galadriel’s armor in the Prime Video fantasy series, speaking about the “controversy” to Digital Spy and the rest of the press during the panel of the series in the San Diego Comic-Con, when after a fan question the showrunners were asked to address the much debated choice of armor.

“Actually, it’s not hers”

The producer explained to fans that the armor they see in the trailer is actually it might not belong to Galadriel.:

“To give a bit of context, though it’s something I don’t think the internet has taken into account yet. It’s not really his armor, it’s a gift from someone else.”

The controversy began when many fans of Middle-earth questioned Morfydd Clark’s choice of Galadriel armor design after the release of some preliminary images. According to ScreenRantKeen ones noted that Galadriel’s armor bears a striking resemblance to the star of the House of Fëanor. Supposedly, the elf would never wear the eight-pointed star, as she has a long-running feud with the Fëanors. 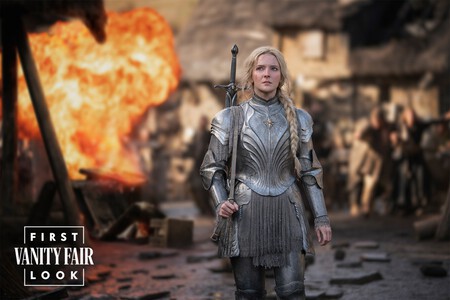 While producer Lindsey Weber may have cleared this up with her response, fans will still have to wait and see who the armor actually belongs to and how it was given to Galadriel. During the panel, there was another look at ‘The Rings of Power’, which showed Anson Boon as one of the physical manifestations of the Dark Lord Sauron. It premieres on September 2 on Amazon Prime.