Without a doubt, it is a weekend brimming with returns: The meta killer of ‘Scream’ returns to theaters, ‘The Peacemaker’ returns, who survived ‘The Suicide Squad’, ‘Monster Hunter’ and ‘God of War’ return in the PC version… but not everything is nostalgia this weekend, and we have 13 varied shots and chicha for you to squeeze it thoroughly.

New installment of the legendary franchise that revitalized the genre slasher set in the late 1990s and which brings us back to Neve Campbell, now far from her youthful years, back in her hometown to find out who has committed a series of crimes. Self-referential humor and many old acquaintances for a sequel that rides the nostalgic waveto beyond the already spent eighty.

Magnificent start to this sequel to one of the most unique characters in James Gunn’s ‘The Suicide Squad’. He survived that nonsense but still has to carry out missions at the command of the government. Quirky secondary, extreme and thug humor, a John Cena in his sauce and tasty recoveries of heroes and villains of third of the DC Universe whom no one seemed to remember, such as Judo Master or Vigilante.

At the absolute opposite extreme of James Gunn’s vision of superheroes is that of the CW network, the Warner subsidiary that has made a fortune with its friendly and general vision of DC heroes. To its new versions of classic heroes like Flash or Supergirl are added their own heroes, and in that wave is this ‘Naomi’, recently released in the United States and which portrays the discovery of a teenager of a series of powers Superhuman.

James Wan (‘Saw’, ‘Warren Files’) is the producer of this horror series inspired by the podcast of the same title that used found footage to tell your story. His argument revolves around that: the reconstruction of some mysterious documentaries and the implication in them of a sect whose tentacles reach further than it seems.

Apple TV+ continues, on its small scale, standing up to the high-flying premieres of platforms such as Netflix or Disney + with more modest but equally luxurious films. In this case, a trio of top-notch names (Joel Coen, directing solo for the first time, Denzel Washington and Frances McDormand) adapting a classic revisited a thousand times, but here with a very careful black and white aesthetic that is waking up on fire. praise among critics.

After a temporary exclusive on Nintendo Switch The new installment of ‘Monster Hunter’ arrives on PC, with obvious technical improvements and a resounding facelift: new graphic options, filters of all kinds, 4K resolution and support for panoramic screens are some of them, although the essence of the game remains. The PC version includes future access to ‘Monster Hunter Rise: Sunbreak’, the gigantic expansion that will arrive in the summer and of which we will know more details this spring.

Another colossal whipping classic that appears on PC is Kratos, until very recently an exclusive inhabitant of Playstation consoles. The great novelty of this version is the Support for NVIDIA DLSS and AMD FSR, two texture smoothing and rescaling technologies that improve graphics performance. In addition, the game offers a native 4K resolution on the most powerful computers. An excellent excuse to reconnect with the god of war (and son).

From the depths of the turn of the century comes a remastered version of ‘ShadowMan’, that polygonal gothic classic that we played on Dreamcast, Nintendo 64 and the first Playstation, and now returns for PC, PlayStation 4, Xbox One and Switch. It is not a reboot, but we will once again be able to enjoy the crude and fantastic original graphics, and its stupendous rendering of two worlds in conflict with very limited visual resources: puzzles, exploration, action and voodoo in a game that retains all its strength.

Lovely space exploration adventure that, although it can be played alone, finds its full potential in cooperative play. We must explore planets in search of riches, settle on them, exploit their raw materials and travel through space to access each of the seven planets within our reach, all with their peculiarities and risks. The immersive soundtrack, the care of the graphics and the cooperative for up to four people online reinforce the indie bet of the week.

Free ‘The Mitchells vs. the Machines’ Art Book

A real gift: the complete art book of ‘The Mitchells against the machines’, free and with all the pages and downloadable images. This film from the creators of ‘Spider-Man: A new universe’ is one of the most original and fun animated proposals on Netflix, and tells how a traditional family has to face the rebellion of the machines. All this in a fast-paced way and without falling into gibberish or moralizing: a fabulous adventure with an excellent visual finish that is analyzed in this book that can now be yours.

David Day is one of the greatest experts on the world of Tolkien. In this book collects a selection of artists, illustrators and engravers who have based part of their work on the worlds imagined by Tolkien. The prolific creativity of these artists and Day’s erudite comments come together in a book that delves into the alternative visions that have conjured up the fictions of the creator of ‘The Lord of the Rings’.

The Obscura publishing house continues to delve into the darkest and most gloomy fiction, this time with a story of supernatural investigations that end up revealing epic conflicts between good and evil. The Reaper is a murderer of priests who kills driven by a terrifying demonic entity, and all the clues handled by the police lead to an unexpected point: a young woman named Gloria. 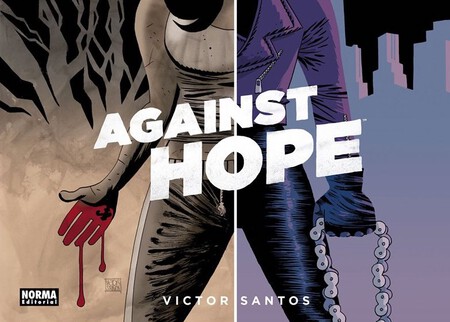 Victor Santos embarks on one of his usual revenge stories without concessions thanks to his splendid drawing style, dynamic and impressive. Here she tells how, after a group of Nazis were about to kill Hope and her boyfriend, she begins a search to consummate her revenge, since in reality she is a brutal bounty hunter willing to do anything to prevent the boss from her attackers. gain more power than you already have.